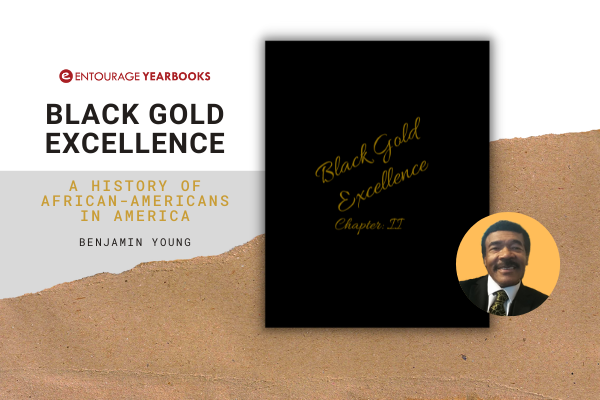 This Black History Month, Entourage Yearbooks is proud to work alongside creator Benjamin Young on a special project: Black Gold Excellence, a history of African-Americans in America.

Young, a former security policeman with the Air Force who served one year in Vietnam and received the Republic of Vietnam Gallantry Cross for his service, is currently residing in Georgia. In his civilian life, he was an electrician, and began his design journey after retirement in 2019. His debut book, Black Gold Family Memories, was also printed by Entourage and was produced last year.

That project, an elegant black photo album decorated with family photos from the past eight generations of Youngs, was distributed at a family reunion last September. Memories became an instant hit among family members, and its success drove Young to want to make another book with a wider subject. Where Memories focused on the Young family in particular, Black Gold Excellence covers the US history of African-Americans as a whole.

I spoke with Mr. Young last week to discuss his current project, his inspirations, and his hopes for the new book.

Following the first section of family photos, Black Gold Excellence uses a pictorial format to highlight the successes of African-Americans in America, from Dionne Warwick and Diana Ross, Sam Cooke and Nat King Cole, to Nick Cannon, Katt Williams, and Denzel Washington, to Muhammed Ali, Venus and Serena Williams, and inventors and scientists like George Washington Carver and Elijah McCoy–and many more.

The final third of Black Gold Excellence delves deeper into the history of African-Americans as a race.

“You know, I put a disclaimer in this book. Because there’s going to be people who are heated by what I had to say,” Young shared with me. “But as I said in the book, ‘there is no good without the bad.'”

“Some of the following information and stories may be hard to swallow for some individuals,” Young’s disclaimer reads, “but as we move from the 1600’s to the 2000’s, the struggle was worth it. So let us encourage each other and leave no one behind.”

Following this warning are more than forty pages about the history of African-Americans in the United States, from the Middle Passage and the first slaves to the Black Lives Matter movement unfolding today. Young also includes detailed history about African-Americans in specific cities, including Alexandria, VA; Camden, NJ; and Buffalo, NY.

While the majority of the body copy was gathered from online sources, the page design for Black Gold Excellence was done by one of Entourage’s in-house graphic designers, Felicia Taylor. Taylor has been working with Entourage for the last eight years, and she’s seen more designs than most.

“It has been a great pleasure and an enriching experience working with Mr. Young,” said Taylor. “I’ve learned a lot, and I feel honored to have this experience. It’s more fun than work.”

Taylor has so enjoyed working alongside Young that she was inspired to create a custom t-shirt, decorated with his signature sign-off phrase: “Wear that mask!”–which he cheerfully reminds all callers at the end of every conversation (the routine response being, “Calm down!”). The shirts are available for purchase online at http://tee.pub/lic/hNeWmTqqQEo and were also sold at the Young family reunion last September.

While there is no doubt a cheerful atmosphere among the team designing and producing Black Gold Excellence, Young is solemn and serious when discussing his motivations for doing so: “Black-on-Black crime.”

It’s a loaded phrase, and Young shares his thoughts with me on the matter with passion and determination. He is concerned with the intraracial homicides in large cities like Chicago and Philadelphia in particular, and was incited to create Black Gold Memories when he saw the lack of attention being paid to Black-on-Black crime by modern protestors. “I asked a friend, ‘Why don’t they protest about this?’ And she said, ‘They just don’t know any better.’ And I said, ‘Who doesn’t know better? The 220,000 students at HBCUs?* The 25% of black females in the military?** Or the 20% of black males [in the military]?’***

In his stately Southern accent, Young tells me his hopes for the audience of this new book: “The idea is, if more people are more proud of their race, they will be less inclined to use violent means against others of their own race.” His dream is to inspire a community influencer like Jesse Jackson or Al Sharpton to meet with the leaders of inter-city gangs, to begin a discourse toward peaceful resolution of gang violence.

“I want to inspire more Blacks to be proud of their race,” said Young. “Because they come from kings and queens.”

Here’s hoping that Black Gold Excellence will do exactly that.